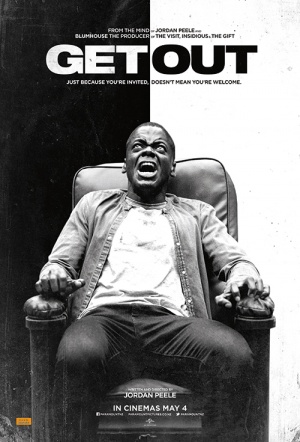 Racially charged horror from Blumhouse Productions (Paranormal Activity, Ouija) starring Daniel Kaluuya (Sicario) in an Oscar-nominated performance. Along with a nomination for Best Picture and Director, Jordan Peele won an Academy Award for his original screenplay.

Now that Chris (Kaluuya) and his girlfriend, Rose (Allison Williams), have reached the meet-the-parents milestone of dating, she invites him for a weekend getaway upstate with Missy (Catherine Keener) and Dean (Bradley Whitford). At first, Chris reads the family's overly accommodating behavior as nervous attempts to deal with their daughter’s interracial relationship, but as the weekend progresses, a series of increasingly disturbing discoveries lead him to a truth that he could have never imagined.

It’s hard to remember the last time we had a horror film that burns with such lacerating topicality as Jordan Peele’s Get Out. Employing genre conventions in service of skewering and exposing the insidious nature of racism, it suggests the iconic, politically charged, zeitgeist-defining wallop of your Romeros and Carpenters of yesteryear.

Blending race-savvy satire with horror to especially potent effect, this bombshell social critique from first-time director Jordan Peele proves positively fearless - which is not at all the same thing as scareless.

A horror film with the power to put a rascally grin on the face of that great genre subverter John Carpenter (They Live), Get Out has more fun playing with half-buried racial tensions than with scaring us to death.

Part of what makes "Get Out" both exciting and genuinely unsettling is how real life keeps asserting itself, scene after scene.

It's rare for a studio horror film to feel this fresh and daring and it's arrived at a frighteningly topical moment for a country where racism is scarier than ever.

What's not really up for debate is how inherently smart and devilishly taut Get Out is.

There's so much here that Peele gets right, and he delights in turning familiar thriller tropes on their head: In this racially charged context, he knows exactly how to exploit the sight of an approaching police car for maximum stomach drop.

One of the most satisfying thrillers in several years... proves that its first-time director, Key and Peele costar Jordan Peele, has plenty of career options if he should grow tired of doing comedy in front of the camera.