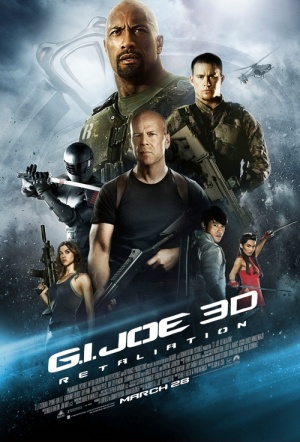 The sequel to 2009’s The Rise of Cobra, based on Hasbro’s militia merchandise, with two new colossal additions: Bruce Willis and Dwayne Johnson. When the Joes are framed as traitors by an imposter President and attacked by their own nation's forces, they set out to track down the original G.I. Joe, General Joseph Colton (Willis). Colton joins forces with Roadblock (Johnson), Flint (D.J. Cotrona), Lady Jaye (Adrianne Palicki) and Snake Eyes (Ray Park)  to clear the Cobra infiltrators out of the White House before the Cobra Commander can tighten his grip on world power.

From the writers of Zombieland and the director of Step Up 3D.

Channelling my inner 18 year old, the first word that hits my keyboard is - awesome! G.I. Joe is about big boys' toys and high calibre action. Tick and tick.

Everything in Retaliation is calibrated to snare a 13-year-old's attention span and the story, such as it is, acts as little more than a limp washing line on which to peg those incendiary set-pieces.

Plays like a tiresomely extended evening of channel surfing.

So fetishistic about high-powered weapons that it qualifies as an NRA wet dream, G.I. Joe: Retaliation pretty accurately reflects the franchise's comic book and cartoon origins, which is both a good and a bad thing: good if you're a 12- to 15-year-old boy, bad if you're just about anyone else.

It's well-executed technocratic action fluff. But it did leave me buzzed rather than drained.

The first film you could at least laugh at. This takes all its silly ingredients and smushes them down flat.