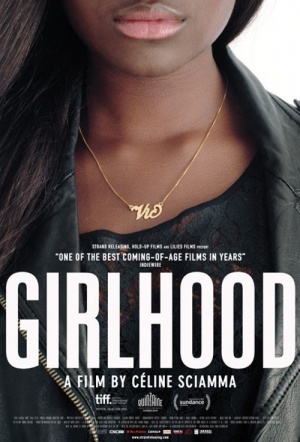 Tough coming-of-age drama from Céline Sciamma (Tomboy, Water Lilies) about Marieme, a young woman searching for her identity amid an all-girl gang. Nominated at Cannes 2014 and for Best Film at the French Lumiere Awards.

"Sciamma continues her exploration of the effects of social conventions on delicately forming female identities in her triumphant third film. Sixteen-year-old Marieme (Karidja Touré) must navigate not only the disruptive onset of womanhood, but also the inequalities of being black and living in the underprivileged suburbs of Paris. Excluded from school and in fear of her overbearing brother at home, Marieme escapes into the shielding environment of a girl gang. She renames herself ‘Vic’ for ‘Victory’ and gives up on asking for the things she wants and learns to just take them.

"Formally meticulous, the film is divided into four distinct segments in which Marieme changes her physical appearance to suit the different worlds she must navigate (school, home, street). Each transformation magnificently captures the heavy burden that visibility and image play in Marieme’s life." (London Film Festival)

As in “Water Lilies” and “Tomboy” before this, Sciamma pushes past superficial anthropological study to deliver a vital, nonjudgmental character study.

Sad and wrenching, it doesn't feel like a misery-mongering expression of high-minded (and therefore condescending) concern.

Beautifully observed, precisely directed and acted with wonderful conviction, it pulls us into the life of its protagonist in a deeply involving way.

These gendered rites of passage are a bittersweet triumph.

Where many filmmakers would have underlined the bleaker, harsher aspects, Girlhood presents the characters' grim reality without surrendering its lightness of touch, its compassion or its hope.

A gripping, non-judgmental look at a young girl finding herself in the toughest circumstances.