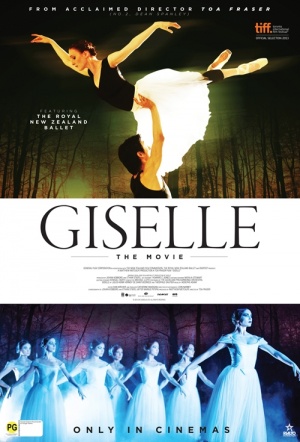 Director Toa Fraser (No. 2, Dean Spanley) brings The Royal New Zealand Ballet to the big screen, capturing their acclaimed production of the two-act classic Giselle (first performed in 1841). Features a score by the Auckland Philharmonic Orchestra.

Filmed over two nights at Auckland’s Aotea Centre, with additional filming taking place at Wellington’s St James Theatre and on the Royal New Zealand Ballet’s tour of China, the film is a collaboration between the Ballet and the NZ Film Commission, having made its world premiere in Auckland as part of the NZ International Film Festival 2013.

Says Fraser: "There's no dialogue - beginning to end it's very much inspired by what the Royal New Zealand Ballet are doing on stage - the music and the movement and the emotion on stage does all the story telling for you... I come from a writing background so it's been very releasing to say I'm not going to write stuff, I'm just going to respond to what's in front of me.  I actually don't know what it is. It's going to be good though."

Fraser has also expanded the experience by interspersing the acts with modern, wistful vignettes featuring Murphy and her talented dance partner, Qi Huan as Albrecht. We see them in contexts removed from the stage: a dreamily filmed meadow, a naturally lit studio, and, during what would be the intermission of the live performance, on a lonely rooftop in Beijing, where the production premiered.