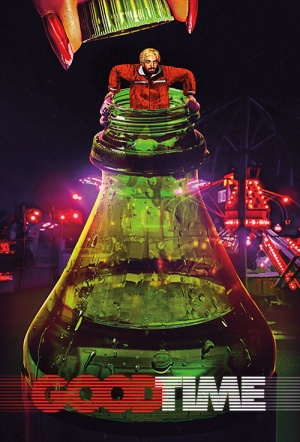 After a botched bank robbery lands his younger brother in prison, Constantine Nikas (Pattinson) embarks on a twisted odyssey through New York City’s underworld in an increasingly desperate - and dangerous - attempt to get his brother out of jail. Over the course of one adrenalised night, Constantine finds himself on a mad descent into violence and mayhem as he races against the clock to save his brother and himself, knowing their lives hang in the balance.

There was a time, not that long ago, when the accolade “career-best performance from Robert Pattinson” meant very little – a matter of Twilight enthusiasts debating which hormonal teen vampire movie features the best performance from the British heartthrob. Now, at least for those who have been following Pattinson work the indie film circuit, directed by the likes of David Cronenberg (Cosmopolis) and David Michôd (The Rover), it means a little more.

Good Time is a film about a destructive love - and loving someone despite not having the right kind of love to give them. Ignore the deceptively convivial title: This is the kind of thrill that sticks.

This eyes-open-to-the-world NYC crime thriller is cocky, grubby and electric.

It is a sombre, downbeat movie whose initial thrills give way to sadness.

If you're going to make a thriller, it has to feel like your life depends on it, not your next job.

This is a richly textured genre piece that packs a visceral charge in its restless widescreen visuals and adrenalising music, which recalls the great mood-shaping movie scores of Tangerine Dream.

Further solidifies Robert Pattinson as one of the most exciting actors working today.

Features a strong performance from the criminally underrated Robert Pattinson.