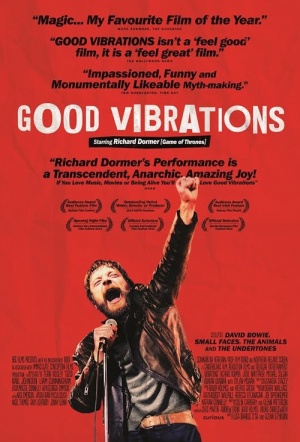 Comedy biopic on Terri Hooley (Richard Dormer) - the Irish record store instrumental in developing Belfast's '70s punk-rock scene. Starting with a record store called Good Vibrations and then the label of the same name, Hooley first fostered an alternative music community in his city and then helped bands such as The Undertones and The Outcasts make their mark. Dylan Moran, Jodie Whittaker (TV's Broadchurch) and Liam Cunningham (TV's Game of Thrones) co-star.

"Terri Hooley is a radical, rebel and music-lover in 1970s Belfast, who opens a record shop calling it Good Vibrations. Through it he discovers a compelling voice of resistance in the city's nascent underground punk scene. Galvanising the young musicians into action, he becomes the unlikely leader of a motley band of kids and punks who join him in his mission to create a new community, an alternative Ulster, to bring his city back to life." (SXSW Festival)

Good Vibrations may be the most aptly monikered film of the year. Overspilling with boozy bonhomie, it thrums along to its own inimitable groove, leaving you little choice but to join the party. Beginning, “Once upon a time in the city of Belfast…” it tells the barely credible – but true – story of Terri Hooley, a glass-eyed chancer who started the eponymous record shop, then a legendary punk label, in 1970s Belfast, a city torn apart by politicised violence.

Dithers between being honest about its hero’s faults (alcoholism, selfishness, being a lousy husband and father) and celebrating his virtues (fearlessness, generosity of spirit). However, the pic’s pluses include a spot-on rendering of the sweaty, shabby period milieu and a breakout turn by thesp Richard Dormer.

Lisa Barros D’Sa and Glenn Leyburn’s likeable but flawed biopic of a ’70s Belfast punk hero stands and stumbles on its charm levels.

Dormer is immensely likable as Hooley, and Johnson brings a dour conviction to his father, an elderly disillusioned communist who finds spiritual victory in electoral defeat.

A rousing tale of rock 'n' roll rebellion that shows how one man's black-vinyl passions ended up socking it to The Man.