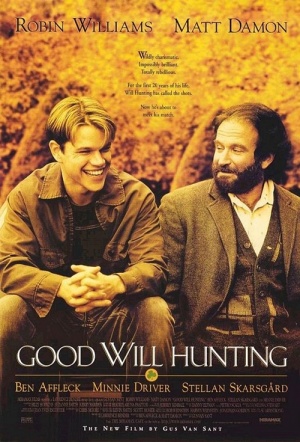 Will Hunting (Damon) excels in maths and chemistry, a talent he fails to recognise. Despite the praise given to him by a highly distinguished professor in mathematics, Will cannot break his attachment to his South Boston working-class environment. But when empathetic psychologist Sean Maguire (Williams) takes notices of his potential, Will starts to build the momentum that could turn his life around.

This beautifully realized tale is always engaging and often quite touching.

Both touching and funny, and if you enter the cinema with even the tiniest amount of good will, you're guaranteed to exit this movie with a whole lot more.

The script's bare bones are familiar, yet the film also has fine acting, steady momentum, a sharp eye and a very warm heart.

It's the individual moments, not the payoff, that make it so effective.

While the charismatic performances of Damon and Affleck make it difficult entertainment to resist, doing just that is not as hard as the film would like to think.

Simply, as good as movies get.