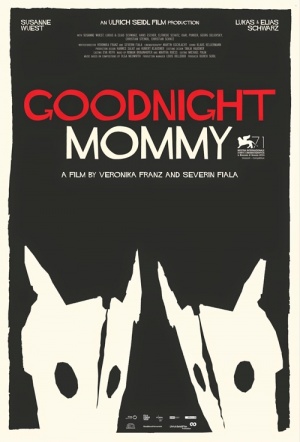 In a stark ultramodern home, twin nine-year-old boys await the return of their mother, who arrives with her face bandaged after cosmetic surgery. When she sounds different, behaves different, they start to question her identity...

"The first fiction feature from the writing-directing team of Severin Fiala and Veronika Franz, Goodnight Mommy was produced by acclaimed Austrian auteur Ulrich Seidl (who previously collaborated with Franz on the screenplays for several of his own films), and it is not hard to see the affinities with Seidl's work in its combination of psychological acuity, borderline body horror, and rigorous, nearly architectural sense of space. A starkly modernist glass structure set against an incongruous backdrop of cornfields and lush forests, the family's home resembles a monumental tomb — a chillingly perfect setting for the film's story of familial disintegration. No less powerful, the mother's hidden face functions as an evocative metaphor for the love the boys feel she is withholding from them, and her inability to realize how much her physical changes are contributing to the strained atmosphere at home ultimately proves tragic." (Toronto International Film Festival)

A hefty part of the suspense stems from the fact no one seems to be behaving rationally: not mommy, not the kids.

Every minute that goes by ratchets up the mystery and the unease.

This insidious tale of a mother-son bond gone haywire is squirm-inducing stuff. It has cult potential stamped all over it.