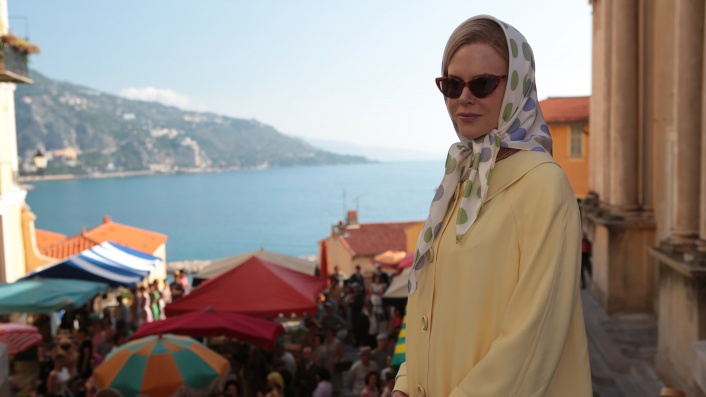 Nicole Kidman is Grace Kelly, the 1950s Hollywood star who retired from acting at age 26 to take up duties in Monaco as the wife of Prince Rainier III. Follows Kelly's crisis of marriage and identity during a political dispute between Rainier (Tim Roth) and France's Charles De Gaulle (André Penvern), which threatened a French invasion in the early 1960s. From the director of La Vie en Rose. More

The script has been critised by the Royal Family of Monaco, their statement concluded: "The Royal Family wishes to stress that this film in no way constitutes a biopic. It recounts one rewritten, needlessly glamorised page in the history of Monaco... with both major historical inaccuracies, and a series of purely fictional scenes." Kidman, in an interview with French newspaper Le Figaro, said in response: "This is not a biopic or a fictionalised documentary of Grace Kelly, but only a small part of her life where she reveals her great humanity as well as her fears, and weaknesses."

As someone with the utmost aversion to body shaming and Hollywood beauty ideals, this is a hard one to frame but it has to be acknowledged that if you undertake to portray one of the most mesmerising beauties in all of film history, then certain expectations exist. One of them is not that a 33-year-old Grace Kelly will be portrayed by a middle-aged woman whose waxen death mask of a face has been paralysed into an approximation of youth. It’s unfair, but everything else hinges on the fact that if Kidman had dazzled, the rest of the film’s flaws would seem more forgivable. Instead her taut features fascinate, but in a distracting, Siamese-twin-foetus-in-a-jar kind of way.

Little is left to our imagination or intelligence as characters spout facts and exposition and we're treated to a parade of familiar historical figures in distracting smaller roles.

Like a 104-minute Chanel ad, only without the subtlety and depth.

Kidman does her best to dignify the role, but it's all victimhood and tears.

The film fails to deliver any dramatic punch or psychological insight. An opportunity squandered.

Grace of Monaco is available to stream in New Zealand now on Google Play and Apple TV and TVNZ+.