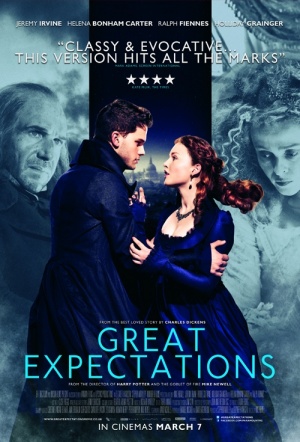 Young orphan Pip (Jeremy Irvine, War Horse) is given a chance to rise from his humble beginnings thanks to a mysterious benefactor. Moving through London's class-obsessed world as a gentleman, Pip uses his newfound position to pursue the beautiful Estella (Holliday Grainger, Jane Eyre); a spoilt heiress he's loved since childhood. Yet the truth behind his great fortune will have devastating consequences for everything he holds dear...

Director Newell told Empire Magazine: "It has a different tone [to previous adaptations]. It's partly a thriller, but it's partly about treachery and letting people down that you shouldn’t let down."

A passable adaptation that does little to burnish the estimable screen legacy of a Dickens classic.

Its glossy looks, first-rate playing and famous pedigree will be cat-nip to book-groupies.

An attractive and robust screen adaptation of the classic 1861 Dickens parable...

It's all very Tim Burton - but eccentric Victoriana is a fitting spin on a familiar tale.

Vivid characterizations from Ralph Fiennes and Helena Bonham Carter are the highlights.

Schoolteacher-friendly interpretation... makes no real case for going down this much-travelled road once more.