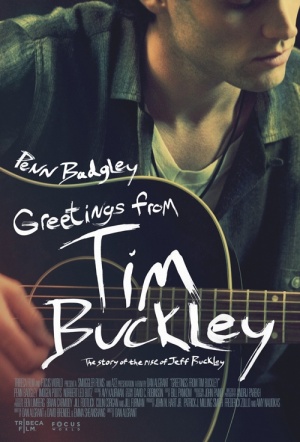 "Follows the young Jeff (Badgley) in the days leading up to his debut public performance at a 1991 tribute concert to his father at St. Ann's Church, as he struggles to come to terms with a lifetime of mixed feelings towards the father who had abandoned him and his mother shortly after Jeff was born. As Jeff prepares to make his own step into the limelight — and finds romance with Allie (Poots), a young woman working at the concert — we witness a son emerging out of his father's long shadow, and see tantalizing glimpses of the nascent genius that would be revealed in its full glory on Jeff's landmark 1994 album Grace." (Toronto Film Festival)

The result is at once skillfully observed and a bit so-what.

Little of the chops and charisma Buckley had in spades is channeled; this is still the usual Let Us Now Praise Famous Men karaoke session, wrapped up in some extra-discordantly warbled notes.

It's sweet, sentimental, almost inevitably touching if not especially persuasive, brushing against the thorns in each man's life without drawing blood.

Has a sense of urgent originality that works even apart from its great Tim Buckley score.

Badgley is terrific, and even if he doesn't quite succeed in making Jeff Buckley likeable, he does make the singer's standoffish attitude understandable.