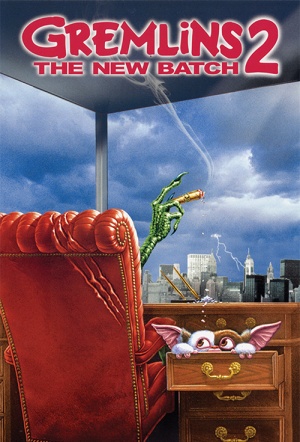 In the 1990 sequel to 1984's American comedy-horror Gremlins, Zach Galligan and Phoebe Gates return to star as Billy and Kate, a young couple who have to save New York City from a rapidly multiplying population of Gremlins headquartered in a high-rise building. Director Joe Dante goes heavy on satire and slapstick, for an anarchic, cameo-filled riot of a pic.

The magical collectibles store that Gizmo (voiced by Howie Mandel) called home has just been destroyed, and the tiny monster makes his way into a newly erected skyscraper. Billy Peltzer and his fiancée, Kate, who have previously dealt with Gremlins run amok, discover that Gizmo and a legion of reptilian pals are inhabiting the downtown building. The situation worsens when the devilish green creatures invade a top-secret laboratory and develop genetically altered powers, making them even harder to destroy than before.

Speaks to the gleeful hell-raising monster in each of us, and it speaks with much more verve, cleverness and good humor than the film on which it is based. Add this to the very short list of sequels that neatly surpass their predecessors

Too many gremlins and not enough story line.

You can really tell that the people making this film had a lot of fun doing it. The plot is thinner than a compressed wafer, but who cares? It's fun and cheap laughs all the way, and that ain't no crime.