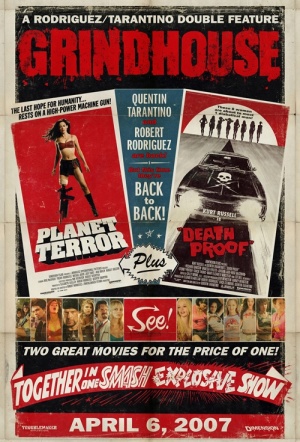 Hear ye movie geeks. Tarantino & Rodriguez tag team up for a cinematic ode to the blood-soaked exploitation epics of the 70s/80s - in the form of a double feature, two 60 minute features.

Rodriguez directs Planet Terror, chronicles the violent struggle between a ravenous army of zombies who taken over, and the remaining survivors who refuse to succumb. Tarantino directs Death Proof, with Kurt Russell as an engine-revving psychopath who has a penchant for hit and runs.

The name 'Grindhouse' comes from a term to describe inner city cinemas in the 70s that showed low-budget independent films which, more often than not, was packed full of nudity & violence to offer something different from Hollywood fare. The influence of such a culture is obvious on the filmmakers and this, it seems, is their unashamed tribute.

This monumentally pointless movie is best summarized by a line from Planet Terror: "At some point in your life, you find a use for every useless talent you have." Rodriguez, Tarantino, and Co. aim for nothing more noble than to freak the funk, and it's about godd--- time. Go wasted, go stoned, go without your parents' permission. In paying homage to an obsolete form of movie culture, Grindhouse delivers a dropkick to ours...

Planet Terror delivers only momentary kicks...while Tarantino's Death Proof is a juicy, delicious treat, its pleasures stem much less from the play with genre conventions than from great dialogue and electric performances...

If you were keeping score, it would be Quentin Tarantino 1, Robert Rodriguez 0...

By stooping low without selling out, this babes-and-bullets tour de force gets you high on movies again...

A fascinating exercise in genre reinvention, a showcase for two radically different approaches to homage....

The only criticism that seems to merit any real discussion is whether directors Robert Rodriguez and Quentin Tarantino actually did make real grindhouse-style fare. To whit, I can easily say: yes, they not only made two on-point grindhouse films, they did them to painful perfection...