get rid of the kids...two hours of mindless peace :)

In the latest Gulliver go round ( there have been at least a dozen variations since 1902) we have a production of enormous precise detail vividly brought alive by state of the art special effects, grand set design and lavish costuming all crushed by the uninspired casting of the slobbering one note buffoon Jack Black in the title role. In his pudgy mitts the Swiftian satire becomes another heavy handed, predictable goof ball routine of sly eyed impishness and soft hearted sweetness applied in the same manner as in the rest of his "zany" canon.

Lemuel Gulliver sets out for the Bermuda Triangle to prove himself as a journalist and to win the heart of the girl of his dreams. Blown off course by a raging tropical storm he finds himself on the the tiny island of the tiny people, Liliput. Gaining their trust he is soon the rage of the land improving infrastructure and counseling the lovelorn. All goes well until he is challenged by General Edward and is humiliated before all who look up to him. Can Gulliver redeem himself? What's more important is that the filmmakers have enough story to fill the second half with fun pyrotechnics.

Black's cuddly bear, man child grows more tiresome with each performance and in Gulliver it's lights out early with the same boorish routine the ubiquitous media gadfly projects whether playing a role or doing an interview. Director Rob Letterman's film does have a precious look and he does inject some nice Python humor here and there but it is all obscured by Black's beached whale of a Gulliver. For lazy parents looking for a baby sitter, the film might serve as that crazy and funny uncle that can occupy the kiddies for two hours. Make sure though you send them with an older sibling. Unlike this loser of a film it will be a win, win for you to abstain.
0 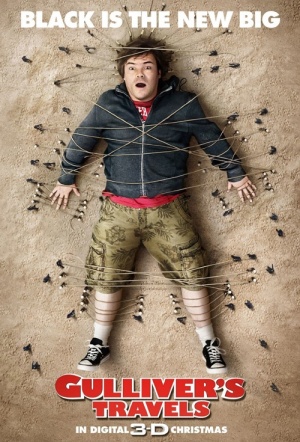