I went with friends, expecting a good movie as some of them had already seen it and raved. I've since heard others doing the same so perhaps I'm the only person in Aotearoa, nay the world, who wonders why anyone bothered putting time and scads of dosh into such a feeble, ridiculous film.
When we know how brilliantly some Hollywood makeup artists can transform actors (Nicole Kidman was unrecognisable but fantastic as Virginia Woolf) the travesty of Travolta who looks barely human as a woman is little short of laughable - and I don't mean humorous.
I have to begrudgingly admit that it was nice, for a change, to see a real woman of substantial size as lead, rather than ridiculed, as Hollywood seems to have an obsession with but I didn't like the sixties when I was living through them so to see them regurgitated on screen was a less than pleasant experience.
Nevertheless, the crowd I went with (although not known for their scintillating wit or high IQ) had a great time and came out smiling (it could have been cramp I suppose).

If you like a sort of hepped-up "Grease" played for laughs then this movie is for you. Others, please make sure you take a puke bag and earplugs and try not to think of all the many more useful things you could have done with the millions that went into making this trash. 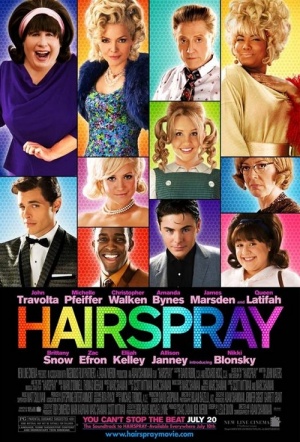