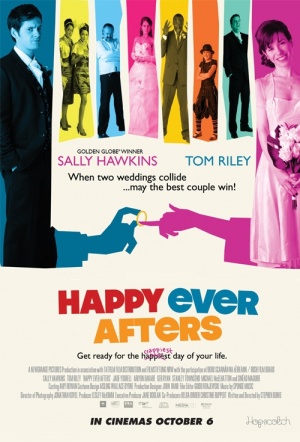 Hawkins is Maura, a feisty, financially struggling single mother getting paid to marry Wilson, an immigrant facing deportation. The union is not met with approval by Maura's daughter Molly, nor by two bungling detectives sceptical of the marriage's validity. At the same hotel, Freddie (Tom Riley, Lost in Austen) and Sophie, a divorced couple, have also just married - for the second time. One venue for two wedding receptions is a tight fit, and when Maura clashes with Freddie, disaster ensues, ruses come unstuck and inter-marriage romance blossoms.

An odd blend of bland slapstick and darkly uncomfortable one-liners.

The film drags on, each twist and turn so reckless and uninspired that it feels like we’re making the whole thing up by watching it.

The tone veers madly between a false jauntiness and a brooding cynicism.

This has the raw materials for an enjoyable culture-clash lark — they’re just scattered all over the place and never come together.