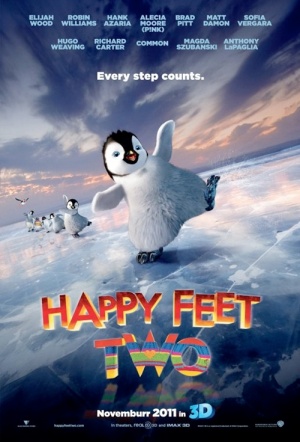 Mumble (Wood), The Master of Tap, has problems. His wee son, Erik, is "choreo-phobic". Reluctant to join the penguin's dance, Erik runs away (encountering The Mighty Sven along the way, a penguin who flys). Meanwhile, a rogue iceberg threatens the homeland. Mumble brings together the penguin nations and all of the continent's creatures - from tiny Krill to giant Elephant Seals to sort it out.

Though it retains the buoyant musical stylings and splendid visuals that made its predecessor so distinctive, this chatterbox of a sequel loses its way with a raft of annoying side characters for which the slender narrative framework provides far too indulgent a showcase.

This joyous, if garbled dance-a-thon barely pauses for breath, never mind plot exposition, but it’s exactly the kind of cinema-only experience that will have under-10s hooked on movies for life.

An amiable sequel with not much on its mind other than funny and creaky jokes, and waves of understated beauty.

For me, Happy Feet Two is pretty thin soup. The animation is bright and attractive, the music gives the characters something to do, but the movie has too much dialogue in the areas of philosophy and analysis.

Dazzling panoramas, no matter how impressive, are no substitute for the involving story Happy Feet Two has had to do without.

Even with the addition of new characters, such as the ones voiced by Brad Pitt and Matt Damon, George Miller's animated sequel just isn't very funny.

The odd stirring sing-song can't save this sugar-frosted animation from turning into an unholy mess. But will it be the last Emperor? Don't hold your breath.

In some ways, it's a more grown-up story than Happy Feet, with more complicated messages delivered in subtler ways.