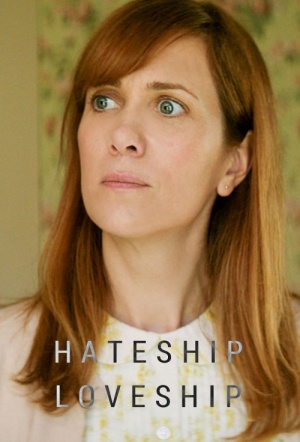 Independent drama starring Nick Nolte, Hailee Steinfeld, Guy Pearce, and Kristen Wiig as a dowdy, unusual young woman who has a life-altering effect on a fractured family after being hired as their nanny.

"Johanna (Wiig) is a profoundly shy, unadorned woman who is hired by Mr. McCauley (Nolte) as a housekeeper and a primary caregiver to his granddaughter Sabitha (Steinfeld). Despite her outgoing nature, Sabitha carries wounds from the death of her mother years before, complicated by the circumstances of that death for which her grandfather still blames her father, Ken (Pearce), a hapless recovering drug addict...

"In an act of mean-spirited rebellion, Sabitha uses technology to foster a pseudo-relationship between Johanna and her father, never dreaming of the potential harm to either party. Sabitha doesn't understand that Johanna is not a demure cut-out, but rather a woman for whom the phrase "still waters run deep" could have been coined. The young girl's interference provokes Johanna to indulge in something long missing from her life: the dream of a future and a home of her own. Johnson stirs the desires of these characters into an emotional stew on slow burn, and the story has twists and turns that belie expectation." (Toronto International Film Festival)

[A] delicate and absorbing character study.

Kristin Wiig's turn as a dowdy caretaker is the highlight of this contemporary American take on Cinderella.