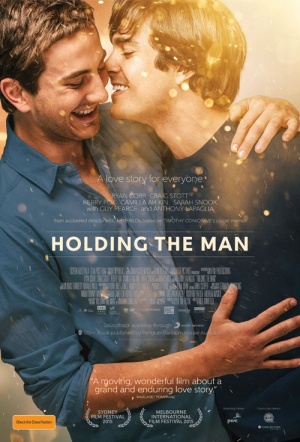 "Published in 1995, Holding the Man - winner of the United Nations Human Rights Award for Non-Fiction - is one of Australia's favourite books. A tender, celebratory and refreshingly honest memoir about the author's long-term love for John Caleo, his Melbourne high school's football captain...  Directed by Neil Armfield (Candy)... Adapted for the screen by Tommy Murphy, whose stage version wowed audiences from Sydney to London, it is every bit as moving, witty and inspirational as its source material." (Melbourne International Film Festival)

Holding The Man could have been a mess. The source material is a memoir cherished by the gay community, riddled with complex emotional subjectivity and fantasy, that became an acclaimed stage play.

The two central performances are superb, Corr and Stott encapsulating the emotional journey to perfection.

Memorable performances but a little wobbly.

Feels like a cross between French Canadian family drama C.R.A.Z.Y. and Philadelphia, but with its own distinctive Aussie flavour.

Owes much to the stage rather than the page, as the majority of its interactions and exchanges make clear.