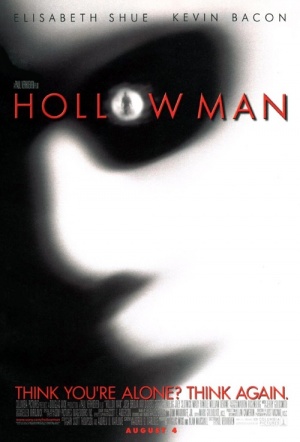 In this science fiction thriller directed by Paul Verhoeven (Robocop, Total Recall), scientist Sebastian Caine (Kevin Bacon) discovers an invisibility serum and persuades his fellow scientists that he should be the human test subject. While the serum works, it turns out to be permanent and also psychologically destabilising as Caine becomes free from observation and scrutiny. His new ability soon sees him indulging his basest impulses with his humanity seemingly having disappeared along with his body.

Caine's scientific colleagues convince him to remain in the lab for further testing, fashioning him a mask to mimic human features and allow some semblance of normalcy. Caine is able to go anywhere he wants undetected when he takes it off, however, and quickly his obsession with ex-girlfriend and co-worker Linda (Elisabeth Shue) takes on a sinister dimension - especially when he discovers she is now involved with another researcher (Josh Brolin). As Caine begins venturing out of the lab and indulging appetites for violence and molestation, the rest of his team are forced to confront a violent, unseen assailant.