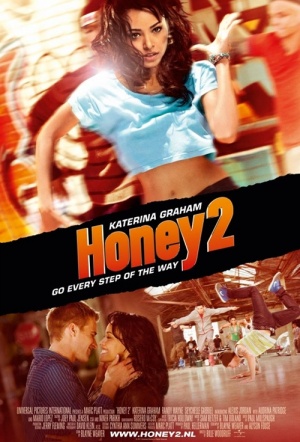 Dance film, sequel to 2003's Honey, that sees a troubled 17-year old dancer returning to the Bronx to coach a rec center dance troupe as they prepare to enter and compete in a TV dance show.

"After a brush with the law, spirited 17-year-old Maria (Kat Graham) returns to her gritty Bronx roots to rebuild her life with nothing but a talent for street dance and a burning ambition to prove herself. Out at a local dance club Maria's killer moves catch the eye of Brandon (Randy Wayne), a rec center volunteer, who invites her to help him transform a group of gifted but indisciplined dancers called the HD's. Maria's skills also attract the attention of her old boyfriend Luis (Christopher 'War' Martinez), the charismatic leader of the award winning 718 dance crew, who hopes to lure her back into the street world she is trying to escape. Seeing a chance at creating a new and meaningful life, Maria pours her heart and soul into dance and begins training the HDs to compete on the television dance competition 'Dance or Die' which means going up against the 718 and Luis." (Official synopsis)

Whereas that Jessica Alba vehicle focused on an individual striving to be a musicvideo choreographer, this sequel follows the popular dance-crew-battles-adversaries-for-fame-and-glory recipe familiar from the recent "Step Up" movies and Blighty's "StreetDance 3D."

For all its killer choreography, alas, it’s clear this genre urgently needs some new moves of its own.

This genre is now as conventionalised as kabuki and noh theatres in its acrobatic choreography and dramatic cliches.