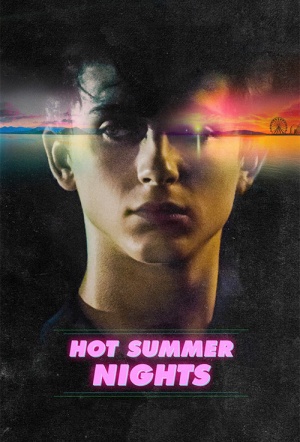 The feature debut of writer/director Elijah Bynum is a '90s-set coming-of-age drama starring Timothée Chalamet (Call Me by Your Name) and Maika Monroe (It Follows).

"American flags wave as fireworks light the sky, it’s 1991 in Cape Cod, Massachusetts, and summer is in full swing. A lonely teenage boy is taken under the wing of the town rebel, falls in love with the prettiest girl in town, and gets entangled in a drug ring, all as the deadliest hurricane in New England history barrels towards the coast." (South by Southwest Film Festival)

Visually atmospheric but tonally all over the place, Hot Summer Nights, a first feature by Elijah Bynum, has much to appreciate but ultimately possesses the sampler-platter vibe of a director's demo reel.