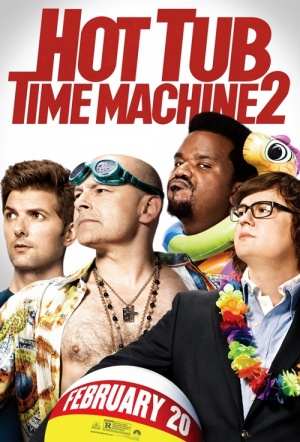 Writer, director and cast (with the exception of John Cusack) return for this comedy sequel. Craig Robinson, Clark Duke and Rob Corddry use their knowledge of the future, gained in part one, to become mega-successful entrepreneurs and musicians. But after Corddry is "shot in the dick," they use the hot tub to reverse this tragic event only to inadvertently end up ten years in the future.

Boorish and crass, homophobic and misogynistic, the very definition of sloppy seconds...

There’s nothing besides repeated use of swear words in lieu of wit.

It’s more a matter of actors saying whatever outrageous thing springs to mind at that moment.

A flop-sweaty cash grab that gives a bad name to sequels in which key talent has jumped ship...

Despite some choice improvisations, we're given no running gag as endearing as the first film.