How Far Is Heaven 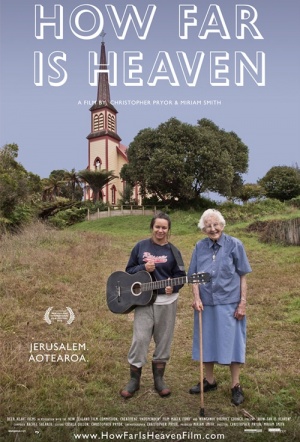 From Chris Pryor (cinematographer on Florian Habicht's early films) and writer Miriam Smith, an observational documentary about the Sisters of Compassion congregation who have lived in the remote village of Jerusalem / Hiruharama on the Whanganui River for 120 years. Today, only three nuns remain.

Jerusalem is the home of "powerful dualities": Maori and Christian spirituality, gang parties and prayers, pig hunting and perfume appreciation... Through four seasons, the film follows the community and in particular the journey of Sister Margaret Mary, the newest Sister to Jerusalem and regular volunteer at the local school.

Though perhaps most famous for poet James K. Baxter’s commune in the '70’s, Maori (Ngati Hau) have lived in Jerusalem for countless generations. In 1892 Suzanne Aubert founded the Sisters of Compassion order, the only homegrown Catholic order in New Zealand. Today the average residential population of the Jerusalem village is 30 people.

How Far Is Heaven / Reviews

How Far is Heaven's grace and subtlety lends weight to how we can justify calling our country Godzone.

In its quiet way, this is a moving, challenging piece of work.