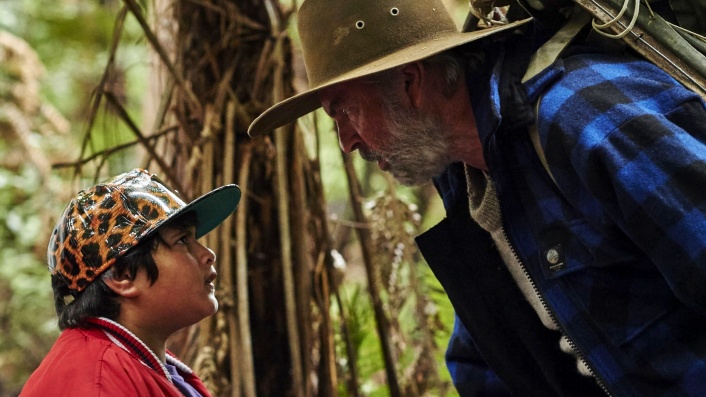 Hunt For the Wilderpeople 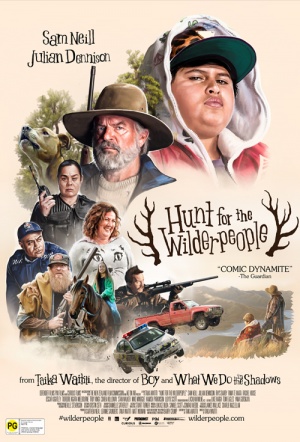 "Raised on hip-hop and foster care, defiant city kid Ricky (Julian Dennison) gets a fresh start in the New Zealand countryside. He quickly finds himself at home with his new foster family: the loving Aunt Bella (Rima Te Wiata), the cantankerous Uncle Hec (Sam Neill), and dog Tupac. When a tragedy strikes that threatens to ship Ricky to another home, both he and Hec go on the run in the bush.

"As a national manhunt ensues, the newly branded outlaws must face their options: go out in a blaze of glory or overcome their differences and survive as a family.

"Equal parts road comedy and coming-of-age drama, director Taika Waititi masterfully weaves lively humor with emotionally honest performances by Sam Neill and Julian Dennison. Never short on laughs, this touching story reminds us about the journey that growing up is (at any age) and those who help us along the way." (Sundance Film Festival)

Hunt For the Wilderpeople / Reviews

On paper, the idea of releasing a film in 2016 about a smartarse kid and his taciturn caregiver on the lam in the New Zealand bush seems foolhardy. Let alone one based on a Barry Crump novel, the author seeming representative of an even more bygone age than when he was still a cultural fixture. After watching a quarter hour or so of dry, low key, Taika Waititi humour - charmingly funny as it may be - amid Hunt for the Wilderpeople’s rural setting, you may be wondering if the pic has more going for it. In four words: it bloody well does.

A pleasing comedy-adventure that pays cheeky homage to key early works from that nation’s first filmic renaissance... Despite the humor, there’s a cornier, more formulaic core here than in the writer-helmer’s prior successes “Boy” and “What We Do in the Shadows”.

Waititi’s followup to What We Do in the Shadows is more formulaic, but this family comedy does have surprising bite and great, off-kilter performances.

Everything about Hunt for the Wilderpeople charms and delights – especially its preternaturally talented young lead, the charismatic Julian Dennison.

Get ready, New Zealand, to wrap your laughing gear around this.

A deliciously good time at the movies... familiar but perfectly balanced blend of drama and comedy.

Waititi doesn’t shy away from sadness or alienation, and he revels in the bizarre. His films have a great well of empathy for outsiders, and so it’s fitting that Wilderpeople should take us to the great outdoors... While the plot and some of the characters may be a bit cartoonish, the emotions always feel honest and Waititi is able to get some big laughs thanks to his charming protagonists.

Hunt For the Wilderpeople / Trailers