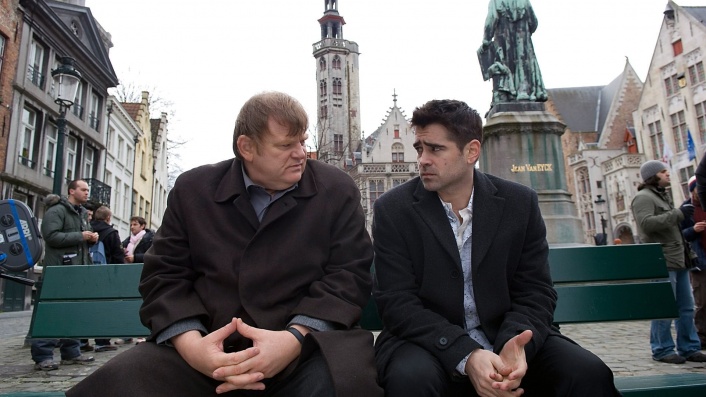 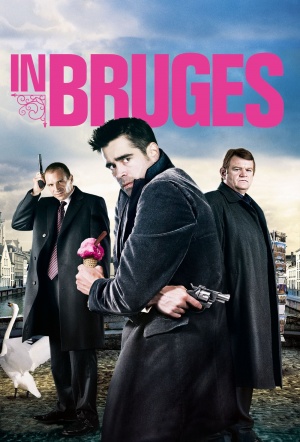 Hitmen Ray (Colin Farrell) and Ken (Brendan Gleeson) have been ordered to relax in the medieval Belgian city of Bruges (pronounced 'broozh') by their boss Harry (Ralph Fiennes) to cool their heads for a couple of weeks after a difficult job.

They are both a bit out of place amidst the ancient architecture, canals, and cobbled streets; Ray hates the place but the fatherly Ken rather enjoys the beauty and serenity. But the longer they stay waiting for Harry's call, the more surreal their experience becomes, as they find themselves in weird encounters with locals, tourists, violent medieval art, a dwarf American actor (Jordan Prentice) shooting a European art film, Dutch prostitutes, and a potential romance for Ray in the form of Chloë (Clémence Poésy), who may have some dark secrets of her own.

Every once in a while we get a film that's hard to categorise, and this is one of them. In Bruges is a weird mix of bloody violence and situational comedy that occasionally provides a sombre meditation on mortality, and even functions as a picturesque travelogue to boot. And it works. An original, engaging screenplay is brought to life with terrific performances by Farrell and Gleeson, taking a few unpredictable twists and turns on its way to a cracker of an ending.

Closer to pics like “The Hit” and “Miller’s Crossing” than to McDonagh’s bristling, funny plays, this half-comic, half-serious account of two Irish hitmen who are sent to the titular Belgian burg to cool their heels after a job is moderately fair as a nutty character study, but overly far-fetched once the action kicks in.

A haunting and hypnotic movie, just the thing to get lost in.

An endlessly surprising, very dark, human comedy, with a plot that cannot be foreseen but only relished.

This finale, which piles one bloody absurd epiphany on top of another almost ad infinitum, is where McDonagh lays all his cards on the table -- and his characters are the ones who have to pay up.

With In Bruges, the British gangster movie gets a Croydon facelift. It may not be new, but it’s a wonderfully fresh take on a familiar genre: fucked-up, far-out and very, very funny.