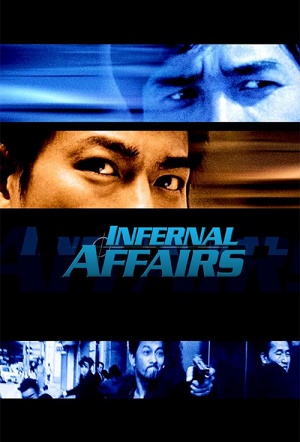 Directed by Wai-Keung Lau and Alan Mak and later remade as The Departed by Martin Scorcese, this Hong Kong crime-thriller follows an undercover cop (Tony Chiu Wai Leung) and a triad member (Andy Lau) working as a police department mole.

Ten years after their appointment as moles, undercover policeman Chan Wing-Yan (Leung) and triad member Lau Kin Ming (Lau) are growing confused about their true identities while their respective employers, police superintendent Wong (Anthony Wong) and crime boss Hon Sam (Eric Tsang) continue to wage a battle of wits against each other. Each boss learns that the other has a mole working for him and Ming and Yan have to scramble to expose one another's identity in an effort to save their own skins.

A relentlessly taut Hong Kong cop thriller that, unlike many of its cinematic peers, doesn't burn off tension in choreographed action sequences.

It's refreshing enough to make up for its occasional missteps in the storytelling department.

This is a movie that gets its hooks into you early, and no chance is it letting go.

There is a perceptible thinness to the sheen of the proceedings, and the actors... rely on a flow of soulful, impassive cool.

What gives Infernal Affairs its heat is the friction of who-am-I psychology and cool Hong Kong-style action.

The movie's engine is the relationships and the characters' inner lives, all of it boiling with emotional intensity.

It overflows with psychological intrigue, something often missing from such offerings.

Superbly honed at both script and performance levels, with character taking precedence over action.

...careful plotting, rich characterisations and sleek mise-en-scène give this an impact rarely seen in HK films these days.

The relentless pace of Infernal Affairs, briskly spinning a story of two men on a collision course with their principles, offers lessons for Hollywood. This is how movies can move. This is how mature an action movie can be.

This stripped-down noir, about a pair of detectives leading undercover lives, signals a new era for Hong Kong filmmaking.

What makes it special is the inner turmoil caused by living a lie. If everyone you know and everything you do for 10 years indicates you are one kind of person, and you know you are another, how do you live with that?

With gloss as well as depth, this super-stylish Asian crime thriller should play beyond UK arthouses to become more than another cult favourite.