Putting Out Fire With Gasoline

Erroneously portrayed by its trailer as simply an excessively violent and relatively mindless World War Two parody chronicling the fictional exploits of American Lieutenant Aldo Raine and his rag tag bunch of soldiers, at its heart, Inglourious Basterds is a tragic tale of revenge portrayed through the character of Shosanna Dreyfus, a young French Jew who is a witness and only survivor of the massacre of her family by German soldiers. This slaughter is featured in the utterly captivating opening chapter and is an act overseen by “The Jew Hunter”, Colonel Hans Landa of the SS, who is a wickedly shrewd jester and the film’s other lynchpin character.

Divided into 5 titled chapters, QT’s distinctive style is scattered throughout the film, with a number of his trademark devices exercised, gloriously defying regular filmmaking conventions, including a twice utilised narrator whose voice will be instantly recognizable to Tarantino fans. The dialogue employed within the movie is as brisk and adroit as ever, with scenes that serve to embellish its cadence. Playing with tension is another technique that Tarantino has relished in here, whereby a number of scenes are perpetuated through his ability to elongate the palpable anxiety running just beneath the surface of the character interactions. Customarily, everything in the picture is purposeful and highly detailed right down to the characters names, which are often in homage to Tarantino’s silver screen heroes.

As a proven expert at making use of great music for the creation of classic and enduring scenes, QT was again true to form with the inspired infusion of many action complementing pieces including most notably, David Bowie’s “Cat people (Putting out the fire)”, applied during a beautifully shot and skillfully crafted montage, which features our heroine Shosanna preparing for her final act and serves as the introduction to the final chapter of the film. Imbued with moral ambiguity in its unsettling triumph, this decisive act and culmination of Tarantino’s reimagining of history is a powerful sight to behold, and one which leaves a lasting impression on the viewer while metaphorically reading as a love letter to the power of cinema.

Unsurprisingly, in a cast fronted by Brad Pitt (as Lt. Aldo Raine), it is the other relatively unknown actors (to western audiences anyway) that are the veritable treat of the film, including the brilliant performances of Martin Wuttke as Hitler, Sylvester Groth as Joseph Goebbels, August Diehl as Major Hellstrom and Daniel Brühl as Fredrick Zoller. However, it is Christoph Waltz as Landa & and Mélanie Laurent as Shosanna who undoubtedly steal the show. One, as the wild and heartless, self-serving villain and the other as the anguished and soulful, self-sacrificing heroine, they adeptly embody the two characters on which the success of the film was ultimately dependent. It is undeniable that with Basterds, QT has again created a band of bold and original characters who are surely set to be endowed into the hallowed halls of the Tarantino cult cache forevermore.

Under the self-proclaimed guise of a “spaghetti western with WW2 iconography”, Tarantino has delivered both his most purely entertaining movie yet and an unforgettable film-going experience. But more importantly, with this film he was able to grant the Second World War a somewhat burlesque ending laced with the sense of poetic justice worthy of the carnage and madness that had preceded it. Some will call it self-indulgent and pretentious, however, it is well worth arguing that most art, and the best art is just that. Ultimately, Basterds was a daring filmic celebration made by a film lover for film lovers and anyone who holds claim to the title of ‘cinephile’ would be imprudent to miss this picture on the big screen.

(Take it from a life long film lover who has watched this 5 times on the big screen.) 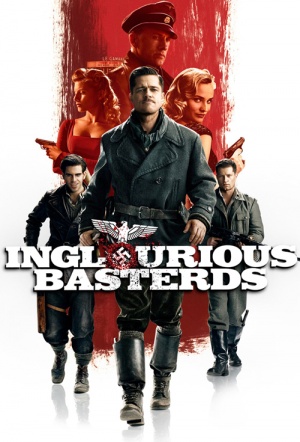