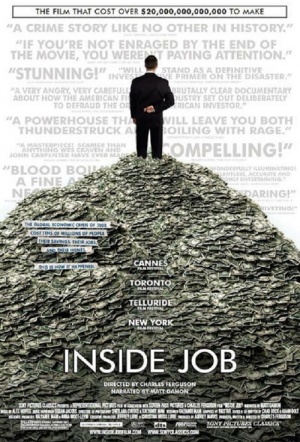 Documentary narrated by Matt Damon that sets out to expose the truth behind the economic crisis of 2008. Winner of the Documentary Oscar in 2011.

Through extensive research and interviews with major financial insiders, politicians and journalists, Inside Job traces the rise of a rogue industry and unveils the corrosive relationships which have corrupted politics, regulation and academia.

Charles Ferguson's sophomore film Inside Job is the definitive screen investigation of the global economic crisis, providing hard evidence of flagrant amorality -- and of a new nonfiction master at work.

Inside Job, a sleek, briskly paced film whose title suggests a heist movie, is the story of a crime without punishment, of an outrage that has so far largely escaped legal sanction and societal stigma.

One of the most fascinating aspects of Inside Job involves the chatty on-camera insights of Kristin Davis, a Wall Street madam, who says the Street operated in a climate of abundant sex and cocaine for valued clients and the traders themselves.

Most impressively, it makes it understandable to those of us who don't know much at all about economics.