The first instalment of Iron Man proved to be a much needed tonic in "fun" action movies in 2008 largely fuelled by Robert Downey Jr.'s magnetic performance. However its sequel proved to be a dud. Thankfully for Tony Stark fans, the series is revitalised with Iron Man 3.

Having appeared in last year's Avengers, there was a sense that the charm of Tony Stark was waning. Luckily for the action movie fanatics, Iron Man 3 is the helmed by one of the genre's most talented screenwriters - Shane Black. The Lethal Weapon scribe brings his trademark biting wit, the friendly banter between characters and likeable foes.

Black breathes new life to the proceedings especially his interesting incorporation of villains into the story's plot, namely The Mandarin (Ben Kingsley). Kingsley proves to be one of the movie's highlights along with the suave Aldrich Killian (Guy Pearce). Pearce delivers a performance which hearken back to the halcyon days of 90's movie's villainy.

Following the event's of The Avenger's, we are left with a post-traumatic Tony Stark, doing his best to bury his demons by investing his time in the one thing that has defined him - the Iron Man suit. This serves as the film's emotional uplift which is not entirely adapted efficiently, but nonetheless gives the movie its gravitas.

Black delivers some impressive action set pieces where the movie gamely embraces the traits of the action movie bygone era. The casting of William Sadler and Miguel Ferrer as the U.S President and Vice President respectively is a nice touch.

Iron Man doesn't fail it its ambitions. At times there are the usual laborious routines of plot description but Iron Man 3 may well be Robert Downey's finest hour in the Iron Man suit. 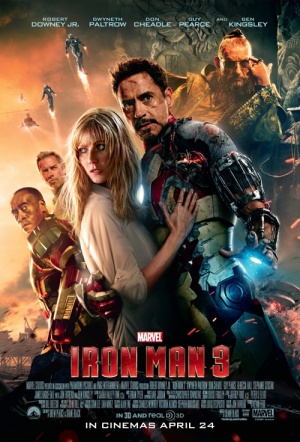