If the world is to truly end in 2012 then this movie is justification enough...

As a connoisseur of bad movies, I've put myself through agonies that make root-canal without anesthetic look like kids stuff. I've sat through EVERY film Nicolas Cage has ever made and, just to prove my superheroic movie tolerance, even watched his 'Wicker Man' remake/abortion twice. So how bad could 'Jack and Jill' be, right? I mean Al Pacino's in it, lowering himself to the status of an Adam Sandler co-star, just as Jack Nicholson before him (in the insipid 'Anger Management.') Only this time, Al must contend with not one - but two Adam Sandlers. Sandler wrote the screenplay (doubtless in crayon on a piece of used toilet paer) and stars as both Jack and his "twin" sister Jill. His portrayal of Jill is not just an insult to women but to men - to everyone. Who ever lived. Ever. And if that weren't excruciating enough - there's Katie Holmes too. Even Johnny Depp pops up - desperate to be part of this badly acted, poorly executed bad taste marathon.
Director Dennis Dugan spewed up 'Grown Ups', 'You Don't Mess with the Zohan' and 'I Now Pronounce You Chuck and Larry' and now continues to vent his hatred on humanity with a film that is not so much a carwreck as Adam Sandler's very own monster motorway mash-up, in which he not only causes the horrific accident but then proceeds to take his pants down and personally take a dump on the dead and dying as they sprawl helpless in the twisted and burning wreckage.
Watching this toilet bowl of cinematic excretia, Marlon Brando's last line of 'Apocalypse Now' just kept playing in my head, over and over: "The horror... the horror..." It's bad, but not like 'The Room' - which is bad, but so bad it's funny. This? This makes crass toilet humour look like Shakespearian tragedy. 'Jack and Jill' is every moviegoers worst nightmare and every movie critics wet-dream. But its banal idiocy goes beyond mere words. I mean where do you begin? It's a comedy that isn't ever remotely funny. The script, direction, acting - everything stinks. 'Sh*t' simply fails to sum-up just how awful it is. In fact, there are only two words known to humanity that can sum up just how terrible this is:
"Adam. Sandler." 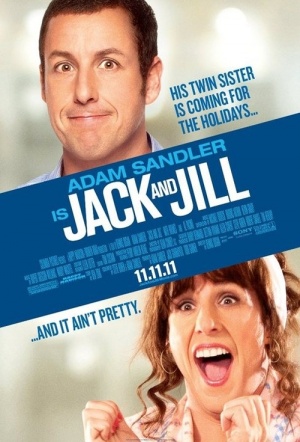