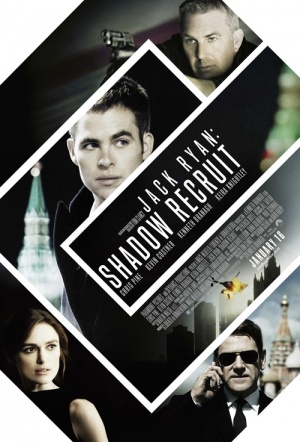 Recruited into the CIA as an analyst after being wounded in combat, Jack Ryan works undercover on Wall Street, tracking financial transactions and trying to spot the next attack on the U.S. When he spots suspicious activity, Ryan is dispatched to Moscow to dig deeper but quickly finds his role change from auditor to active field operative as he goes up against ruthless Russian mastermind Viktor Cherevin (Branagh). Even worse, Ryan's suspicious fiance Cathy (Knightley) has touched down in Russia to check on what he's up to... With the help of his mentor (Costner), Ryan will have to survive this difficult situation if he's to thwart Cherevin's plan to kill tens of thousands of Americans and destroy the U.S. economy.

The character of Ryan features in nine Clancy novels, and has been played on screen by previously by Alec Baldwin (The Hunt for the Red October), Harrison Ford (Patriot Games) and Ben Affleck (The Sum of All Fears). Unlike those movies, Shadow Recruit is not based on one of Clancy's books.

The fifth film to feature the Jack Ryan character, this instalment attempts to rebrand its hunky spy for a new decade. We meet him as a budding university student in 2001, before the 9/11 attacks prompt him to sign up and head off to war, eventuating in an act of heroism that leads to his recruitment into the C.I.A.

Crisp, efficient and appreciably modest in scale...this conspicuous attempt to breathe new life into a long-dormant action franchise gets at least a few things right, chiefly the shrewd casting of Chris Pine.

The plot’s a bit complex for what amounts to a lot of running around — the movie can’t help but evoke the Bourne series along with a high-gloss hint of Skyfall, not wholly unpleasantly.

There’s promising raw material here, particularly in the early scenes. But the film’s second half seems determined to snuff out the promise of its first, making it hard to wish for this incarnation of the character, or any, to have more big-screen adventures.

Yes JR:SR does the talking-acting bits well. But it can't quite match them with action or get past the feeling that this reboot story is an unspectacular retread of so many others.

While Kenneth Branagh does a competent job behind the camera, he’s unaided by a lazy, uninspired and hollow screenplay.