Jeff Who Lives At Home 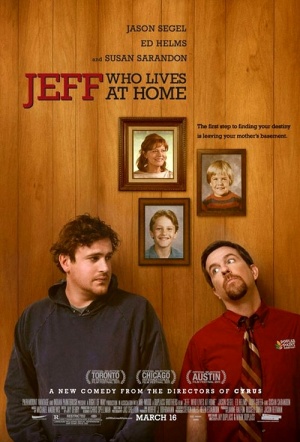 Dramedy starring Jason Segel as a pot-addled 30-year-old still living in his mum's basement. Considered a slacker by his family - mum (Susan Sarandon) and brother Pat (Ed Helms) - he occupies his time considering his role in the universe... From the Duplass brothers, directors of Cyrus.

When Jeff (Segel) goes out to perform a routine errand for his mother, he bumps into his brother Pat, spying on his possibly adulterous wife. A series of coincidences and the resurfacing of buried emotions combine throughout an eventful day, leading Jeff to maybe find the direction he's been missing.

Jeff Who Lives At Home / Reviews

The Duplass brothers take another step toward conventional Hollywood storytelling without sacrificing the sincere, true-to-life quality that got studios interested in the first place.

Cool cast, hip directors, but a movie that's less than the sum of both. Like its title character, Jeff is gentle, warm but a little forgettable.

You come to like Jeff and even to admire him... he turns out to be the hero of a disarmingly sincere spiritual fable.

Likable comedy that suffers a bit from indie self-consciousness.

Segel's performance is the heart of the film, his naive faith making other characters' bolder gestures believable...

There's undoubtedly comedy mileage in an irreverent sending up of the Signs/Magnolia school of everything-is-connected philosophy. Despite the calibre of the cast, the Duplass brothers mostly fail to find it.

Jeff Who Lives At Home / Trailers