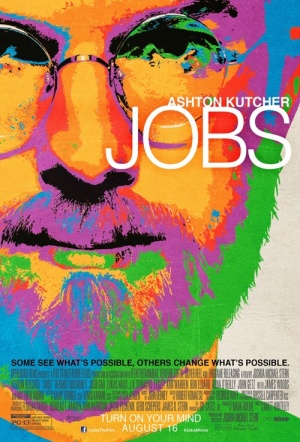 Kicking off from the money they made making the hit Atari game Breakout, Jobs and Wosniak assemble the first Apple computer in his parents’ garage. But what seems like a fun side-project to Wosniak and the crew is merely the beginning for Jobs and his grand vision of what technology could be to the everyman. However, as the years pass, his relationships take a back seat to his relentless devotion - a devotion that worried investors start to challenge.

Rather than the inventor of the iPod, it’s the spectre of Aaron Sorkin that looms largest over this tale. For not only does rookie writer Matt Whiteley’s script attempt to ape Sorkin's Oscar-winning screenplay for The Social Network, but the perma-tanned one has a more authorised version of this same story waiting in the wings.

Avoids outright hagiography, but more or less embodies the sort of bland, go-with-the-flow creative thinking Jobs himself would have scorned.

The film thankfully doesn’t offer some pop-psychology Rosebud to explain Jobs’s drive or near-sociopathic perfectionism, yet we walk away knowing nothing about what made this revolutionary tick.

After a while, you don't care.

This is far from the bomb some would have envisaged, but neither is it the character illumination one would wish for. Jobs appears so consumed by his work here that little else mattered in his life. That may be true, but we're left none the wiser as to what made the man tick, beyond what we already know.

It’s bloated, overwrought, and nakedly sentimental, a sappy and cliched celebration instead of a searching and incisive exploration.

The filmmakers do fall into the trap of overly sentimentalizing a widely beloved public figure who represents an enormous cultural significance. At the same time, however, they keep the movie frequently engaging.