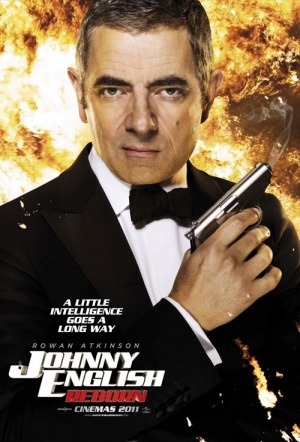 "In the years since MI7's top spy vanished off the grid, he has been honing his unique skills in a remote region of Asia. But when his agency superiors learn of an attempt against the Chinese premier's life, they must hunt down the highly unorthodox agent. Now that the world needs him once again, Johnny English is back in action. With one shot at redemption, he must employ the latest in hi-tech gadgets to unravel a web of conspiracy that runs throughout the KGB, CIA and even MI7." (Official Synopsis)

Much of the film frequently raises smiles, but substantial belly laughs are more sporadic.

Unless the first English left your funny bone aching for more, there are few quantums of solace to be had in these sub-Austin Powers low-jinks.

One day we'll see a film that really harnesses Atkinson's mighty talent. This isn't it.

Atkinson throws every comedy trick in his diverse arsenal at this film - rubber-faced Bean-isms, gross stupidity, slapstick, word plays, farce, absurdity and diverse physical oddities - and the result is a hectic, haphazard mix of the occasionally hysterical with the too-often hopeless.

A 'slightly' more grown up take on the bumbling spy premise that will keep the little audiences entertained and the older guardians subdued.

Director Oliver Parker’s pacing is off and the screenplay fails to provide a lively enough framework for this gifted and intelligent actor’s unique physical comedy.

Low on ambition, Johnny English Reborn still delivers some strong laughs with Atkinson bouncing well off good actors like Rosamund Pike, Gillian Anderson and Dominic West. Still given its thinness, it might be best for all the spy to now go permanently MIA.