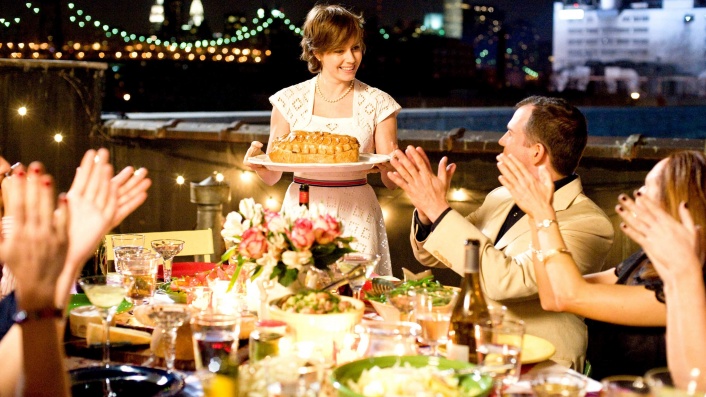 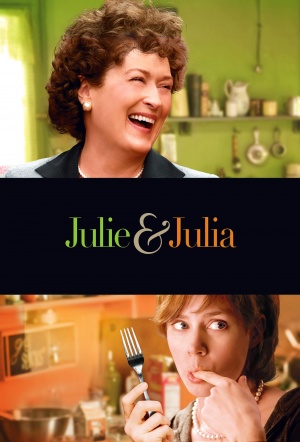 The real Julie Powell began a blog in 2002 chronicling her attempt to cook every recipie in Child's cook book 'Mastering the Art of French Cooking' (1961). This was later published as a book called 'Julie & Julia'. This story, as well as Child's memoir 'My Life in France', are intertwined in the film.

These two women, though separated by time and space, find themselves at loose ends...until they discover that with the right combination of passion, fearlessness and butter, anything is possible.

This middling melange of Child biopic and contempo dramedy feels overstuffed and predigested as it depicts two ladies who found fame and fulfillment in their respective eras by cooking and writing about it.

Julie & Julia proceeds with such ease and charm that its audacity -- is easy to miss.

Meryl Streep -- at her brilliant, beguiling best -- is the spice that does the trick for the yummy Julie & Julia.

Julie & Julia is not lacking in entertainment value, especially with the Streep performance. But if the men had been portrayed as more high-spirited, it might have taken on intriguing dimensions.

Streep has been going through a good patch lately, but even so, Julia Child is the role of a lifetime for her.

It's the best mainstream American film I've seen this year and, like the best meals, it satisfied while leaving you wistfully wishing there were more.

A consummate entertainment that echoes the rhythms and attitudes of classic Hollywood, it's a satisfying throwback to those old-fashioned movie fantasies where impossible dreams do come true. And, in this case, it really happened. Twice.

As enjoyable as this foodie movie is, you wish it would take a deeper, more nuanced measure of the women who, in two different eras, star in the movie's kitchens.

Deliciously funny and warming fare, for which the amazing Meryl deserves her ridiculously overdue third Oscar.