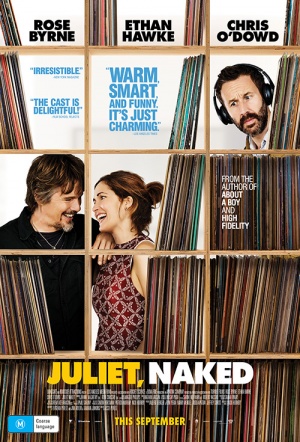 Rose Byrne, Ethan Hawke and Chris O’Dowd star in this rom-com based on Nick Hornby’s novel about an indie rock obsession that leads to romance.

"Annie (Byrne) has long tolerated her partner Duncan’s (O’Dowd) obsession with the obscure rocker Tucker Crowe (Hawke), but she’s reaching the end of her tether. Crowe had a ’90s following, but he disappeared decades ago after a mid-show breakdown, never to be heard from again by his fans. Duncan has never let the light die out, running a fan forum for similar obsessives around the world. When a previously unknown demo version of a Crowe album emerges after 25 years, the events that follow change Annie and Duncan’s lives in the most unexpected ways." (Sydney Film Festival)

[Rose] Byrne is the heart of Juliet, Naked, and she's so winning I was willing to forgive even the odd spasm of Meg Ryan-ish mugging.

"Juliet, Naked" is a gently winning romantic comedy, all keyed to a delightful note of indie-rock obsession.

The best word for the movie might be agreeable. It's easy to glide along on its good-natured path.

It takes a lot of effort to take a film which stars Rose Byrne and still make it mediocre, but, by God, director Jesse Peretz is up to the challenge.

But while each of the three leads is engaging, there's an unreality about Juliet, Naked that director Jesse Peretz never satisfyingly reconciles.

Nick Hornby's 2009 novel about rock fandom run amuck is annoyingly hit-and-miss on screen, but partly saved by the vibrant acting of Chris O'Dowd, Ethan Hawke and the glorious Rose Byrne.

A charming film of an engaging, adult nature about two very different people trying to press reset in their lives, it is comic, heartfelt and smart as they come - a rare combination these days.

Juliet, Naked never truly achieves comic lift-off. Instead, it bumps around from one mild laugh, awkward encounter and bewildering decision to another without ever building up an exhilarating head of steam.