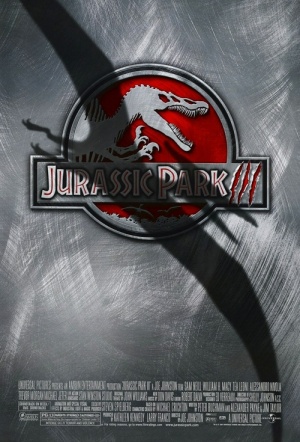 When Paul (Macy) convinces Dr. Alan Grant (Neill) to guide him and his wife Amanda (Leoni) through a simple flying tour over Isla Sorna, he reluctantly accepts. However, when the plane lands, the couple’s ulterior motives are revealed: they are searching for their son Eric who is reported missing after paragliding. Scammed into helping them, the rescue plan soon turns into a fight for survival when a pack of velociraptors begin to show signs of intellectual evolution.

Scratch Spielberg's sloppy The Lost World from your brain, and focus on Joe Johnston's simple but monster-packed addition to the franchise. He's obviously realised it's better to make a fun, lean B-pic than a disappointing, bloated blockbuster.

All it wants to do is scare a smile onto your face, and it often succeeds.

This great dinosaur of a movie is shambling towards well-merited extinction.

In its own B-movie way, it's a nice little thrill machine.

It's a tribute to the action skills of director Joe Johnston (Jumanji is the relevant credit) that this film is as brisk and involving as it is.

The technical credits are not only outstanding but the whole reason for the film to exist.

It lacks the scale, the chills and the wonder of the original, but is more fun as a thrill ride than its sequel predecessor.

Compared to some of this summer's blockbusters, this is better than average.