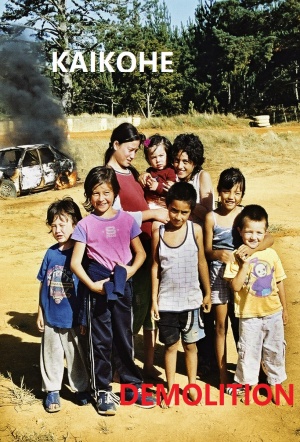 Director Florian Habicht followed up his critically acclaimed feature length Woodenhead with Kaikohe Demolition, a documentary about the frequent demolition derbies held in the title's small Northland town, long held up as a locale ravaged by the plight of modern poverty. Having been raised in the Bay of Islands, Habicht has an insider's perspective of this community that allows him to see past the event's superficial visage of near apocalyptic nihilism and find a more positive symbolism emanating from the mangled wrecks. Beauty, it seems, can arise from the most unexpected sources, whether man or machine. By allowing the subjects to tell their own stories rather than merely being the objects of reportage, the film captures the humour and camaraderie of the event and by extension the maligned community as a whole. Local characters such as Uncle Bimm make for open subjects with palpable warmth towards the film crew and their own unique charm.

The premiere, at the 2005 New Zealand International Film Festival, was a huge event, with the Kaikohe brass band making the trip down to big smoke of Auckland along with many of the documentary's stars, who spoke passionately about their experiences of the shoot after the screening.

If you’ve seen Florian’s previous film, (and if you haven’t, check it out) the artful and fairytale-like Woodenhead (2003), much of the misc-en-scene will be familiar: the rural landscape; the state homes; the barbed wire fences; the backyard garage; the unique people that inhabit our country. This last point, of course, is more prevalent as the camera absorbs lives lived in relative obscurity – except for the town in which they congregate, directly affecting the people they know and the way in which ancestors – known and unknown – are treated in a collective memory.