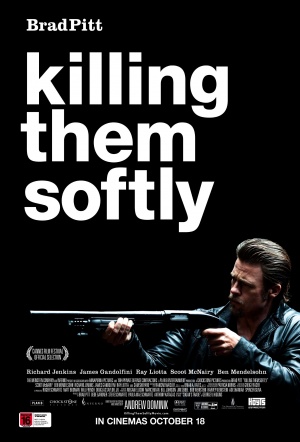 In this dark comic crime thriller, a couple of drug-addled low-lifes rob a mob-protected poker game. Enforcer Jackie Cogan (Brad Pitt) is tasked with tracking the thieves down, and making an example of them to restore confidence in a grubby business built on trust. Pitt re-teams with Kiwi-born director Andrew Dominik after The Assassination of Jesse James by the Coward Robert Ford. Also stars James Gandolfini, Ray Liotta and Richard Jenkins.

While the collapse of the U.S. and global economy lurks in the background, Killing Them Softly depicts a criminal underworld that, like Wall Street, runs on perception, reputation and bureaucratic process - not to mention a bunch of poorly paid Average Joes making a living by doing unpleasant work for their bosses.

Tough, stylish, violent and studded with stars – but like so many of its American gangsters, Killing Them Softly doesn't quite get the job done.

Despite enough pummeling to flatten Rocky Balboa in all six movies, the only thing that truly rewards your attendance is Pitt in another effortless star performance.

This is an unrepentantly cynical take on the hope-and-change promised to the US in 2008; this year's election race makes it look even bleaker, an icily confident black comedy of continued disillusion.

The film is terribly smart in every respect, with ne'er-a-false note performances and superb craft work from top to bottom.