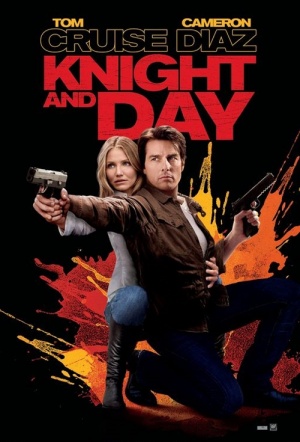 Action-comedy from the director of 3:10 to Yuma and Walk the Line, with Tom Cruise as a cocky super-agent and Cameron Diaz as a ditzy love interest dragged into his deadly, globe-trotting mission.

Knight & Day – Cruise and Diaz's second pairing after 2001's Vanilla Sky – was filmed in various locations around the world, including Massachusetts, Spain, Austria and the tropics.

A high-energy, low-impact caper-comedy that labors to bring a measure of wit, romance and glamour to an overworked spy-thriller template.

Blithe, breezy and a little bit cheesy. Diminishing returns eventually topple it, but not before Cruise has cemented one of his most relaxed and likeable performances in some time.

A loud, seemingly interminable, and altogether incoherent entry in the preposterous and proliferating “action-comedy” genre.

Diaz has one of the most winning grins in the movies. Basically, what I wanted was more of it. Some of that Cary Grant dialog. More flirtation. More of a feeling the characters, not the production, were the foreground. More of the stars.

A far-fetched, nonsensical plot is saved by the charm of Cruise and Diaz and plenty of action

It's hardly a perfect film, not even close, but it is the most entertaining made-for-adults studio movie of the summer, and one of the reasons it works at all is the great skill and commitment Cruise brings to the starring role.

Laziness permeates the film from the inexplicable escapes to the neglected romance.

They make a fun duo, but none of the constituent genres work in this overbearing action-rom-com.

If you've had a busy week and want a bit of light frothy escapist entertainment filmed in far-flung locations full of good-looking people doing thrilling things, this might be the film for you.