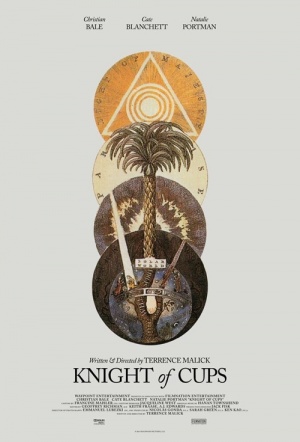 Christian Bale leads this endeavour from Terrence Malick (The Tree of Life) as a man caught between his own self-delusion and the women that occupy his love life (including Cate Blanchett, Imogen Poots and Natalie Portman).

Says the official synopsis: "Once there was a young prince whose father, the king of the East, sent him down into Egypt to find a pearl. But when the prince arrived, the people poured him a cup. Drinking it, he forgot he was the son of a king, forgot about the pearl and fell into a deep sleep."

Another flawed but fascinating reframing of man’s place in the modern world.

Even hardened arthouse film lovers may find Knight of Cups way out of their comfort zone.

This episode has an empty tank.

There are moments of visual brilliance here, moments of reverence and even grandeur.

It is an elegant and strikingly shot film that revels in a series of wonderfully shot locations ... and will likely enrapture fans of Malick's very individual style.

As the film just keeps offering more of the same... it doesn't build or pay off with what it seems designed to do...

The result is ludicrous self-parody - somewhere between a Calvin Klein aftershave advertisement and a coffee-table book about the modernist mansions of the rich and famous.