"Saint Nicholas is not coming this year. Instead, a much darker, ancient spirit. " - Omi

Once in a while I encounter a horror movie that blows me away. Granted there’s very few that are able to, Krampus does an excellent job delivering the terrors and laughs that fits an unforgettable horror movie.

All young Max Engel (Emjay Anthony) wants is a happy and cheerful Christmas celebration with his family. However with very conflicting thoughts and ideas, The Engel Family members usually ends up having pointless arguments with each other. Deciding that Christmas is ruined, Max tore up his letter to Santa and stopped believing in the Spirit of Christmas altogether. Little did he know that his actions summoned the fiendish Krampus to his neighborhood ready to terrorize his whole family.

Krampus is one of those movies that may go under your radar. It’s not very high profile and a horror story set during Christmas may sound very cheesy to others. However, this is one that you should definitely check out. Krampus is filled with moments that are incredibly terrifying. The monsters and creatures are mostly practical effects yet they’re effective in delivering scary moments. The film also does not shy away from telling you that family members can get annoying and people would definitely relate to this family’s issues.

Krampus may have some terrifying moments but it also had it’s comedic chops. With several funny dialogues here and there it eases up the tension and makes it fun to watch. Several characters are great in the film, specially the mom played by Toni Collette but the comedic moments are delivered mainly by David Koechner who’s great in playing the somewhat bitter Uncle.

Though it hits the horror points right on target, the movie does have it’s flaws. It takes a while for the movie to get into gear and sadly you would have to endure at least 30 minutes of people fighting and arguing before getting to the good stuff.

Overall Krumpus is a fun horror film, it finds the right balance between horror and comedy and it works. It’s also a commentary on how people are during Christmas, from the in-fighting between family members to the last minute gift shopping that people do. It shows how people can get crazy during this time of the year and it’s hilarious. Krampus is easily an instant classic, one that can be watched over and over again and still have fun with it. Highly Recommended for people who enjoy horror/comedy movies.
0 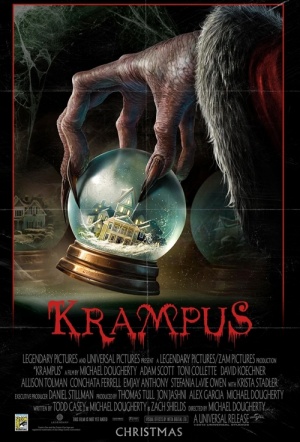