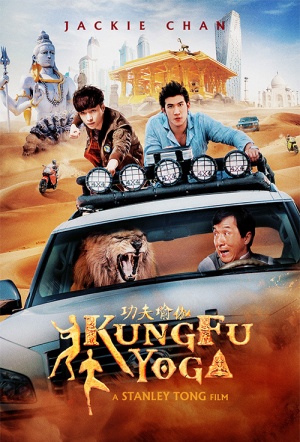 Writer-director Stanley Tong (Rumble in the Bronx) teams up with Jackie Chan for this martial arts comedy adventure set in India and Tibet.

Chinese archeology professor Jack (Chan) teams up with beautiful Indian professor Ashmita (Disha Patani) and assistant Kyra (Amyra Dastur) to locate lost Magadha treasure. In a Tibetan ice cave, they find the remains of the royal army that had vanished together with the treasure, only to be ambushed by Randall (Sonu Sood), the descendent of a rebel army leader. When they free themselves, their next stop is Dubai where a diamond from the ice cave is to be auctioned. After a series of double-crosses and revelations about their past, Jack and his team travel to a mountain temple in India, using the diamond as a key to unlock the real treasure.

A movie that combines kinetic stunts with exotic locations on a very grand scale.

An amiable, average-at-best caper-like quest remains just that, even with recognisable talent, and even more so when its combination of elements is clearly stretched.

By the time it all culminates in a Chan-led classic Bollywood production number, the cuteness factor may have been pushed to its limit, but good luck trying to stop that goofy smile from spreading across your face.

Kung-Fu Yoga scratches fans' itch for no-nonsense, no-pretense Chan fare - in which he isn't second-banana to a Western star, or married to a director who thinks VFX are required to make Chan's stunts more impressive.