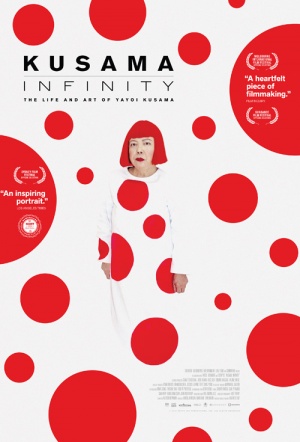 "Frustrated by Japan’s conservative culture, Kusama moved to New York in 1958. Once there, she gained notoriety with her avant-garde sculptures, installations and performances – but little success. She was stymied by sexism and racism, and other artists adopted her ideas but failed to acknowledge her contribution. Disheartened, she returned to Tokyo in 1970, and voluntarily retired to a mental institution. Nonetheless, she continued to create, habitually visiting her nearby studio to work. Today, Kusama’s polka dot creations draw huge crowds at exhibitions around the world, from America to Australia." (Sydney Film Festival)

“I convert the energy of life into dots of the universe and that energy, along with love, flies into the sky” explains Yayoi Kusama as Kusama: Infinity commences. It’s an apt description of the relentlessly creative life and artistic career this documentary goes on to depict over the subsequent 70-something minutes, an economical running time that somehow manages to do justice to the world’s most successful living female artist as it races through her engrossing history.

The installation artist, sculptor and world-famous painter of dots, Yayoi Kusama, is poorly served by this achingly pedestrian biographical film.

A respectful and valuable tribute.

A genuinely felt portrait of the artist as a dedicated survivor, ever in service to her vision of the world and fighting for her place in it.

A film about the struggles undertaken by a woman making it in a man's world.

Part talent, part hustle, part pathological insistence on her own way of dealing with the world, it's an optimistic narrative with plenty of colorful guest stars, and should have a slightly broader appeal than the usual art-world portrait.

...a great introduction to a world famous artist who is likely still a stranger to some.