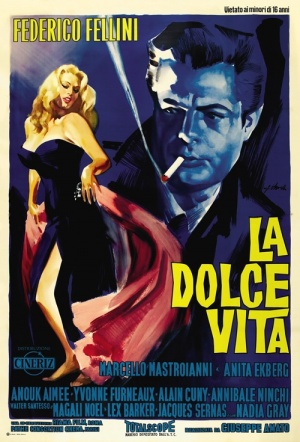 Federico Fellini's 1960 masterpiece that both condemns and glamourises the emerging "modern decadence" of its era.

"The film that coined the term paparazzo stars Marcello Mastroianni as jaded Marcello, a journalist pursuing the good life in Rome at the dawn of the '60s. Condemned by the Vatican, the film was an international succès de scandale. The film’s iconic images – the statue of Christ being flown over Rome, Anita Ekberg frolicking in the Trevi Fountain – are instantly recognisable symbols of Italian society in glamorous dissolution. Nino Rota’s score is just as indelible. Otello Martelli’s sparkling black-and-white widescreen cinematography has never looked better than in this stunning restoration." (Source: NZ International Film Festival 2011)

"After La dolce vita, Fellini was suddenly more than just a director. He was a maestro. His vision was extravagant, almost unprecedented. Like many filmmakers of that era, Fellini was trying to create a genuinely modern cinema… He transformed Marcello’s journey through this glittering, empty world into a spiritual epic, a sprawling, episodic tapestry of Roman cosmopolitan life with all its excesses." -Martin Scorsese.