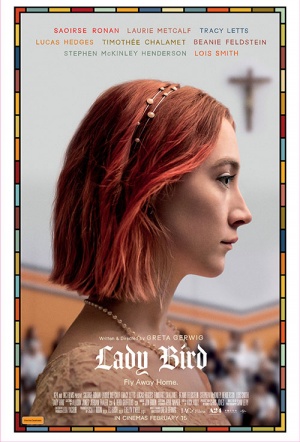 Christine “Lady Bird” McPherson (Ronan) fights against but is exactly like her wildly loving, deeply opinionated and strong-willed mom (Metcalf), a nurse working tirelessly to keep her family afloat after Lady Bird’s father (Letts) loses his job. Set in Sacramento, California in 2002, amidst a rapidly shifting American economic landscape, Lady Bird is an affecting look at the relationships that shape us, the beliefs that define us, and the unmatched beauty of a place called home.

A story about letting go as much as coming of age, Lady Bird, directed by Frances Ha’s Greta Gerwig, exquisitely renders the complex, funny, turbulent love between mother and daughter, which is to say, the way desire can feel like betrayal.

Like most girls raised in faith, or otherwise in a town where the coolest spot to hang out is a parking lot, seventeen-year-old Christine (Saoirse Ronan) — who only answers to her self-christened nickname Lady Bird — steers moments in an effort towards evidence. She pictures herself as a girl in a movie and she knows when to cut.

The kind of modest, miraculous low-budget gem that takes on a life of its own.

It’s a winsome bit of autobiography that rings with bittersweet truth, though some navel-gazing solipsism does creep in.

A symphony of perfectly observed adolescent awkwardness and the heartbreaking bravery it takes some kids just to face another day of not fitting in.

A reminder that no genre is played out when there's a new artist around to see it with fresh eyes.

Lady Bird is well worth your while; she certainly won me over.

The film abounds with pinpoint insights into its mildly rebellious heroine's hunger to shed the restraints of home and Catholic school and bust into an independent life, and does so with a wealth of keenly observed detail.

A deeply funny film that still manages to grapple with heady emotional territory.