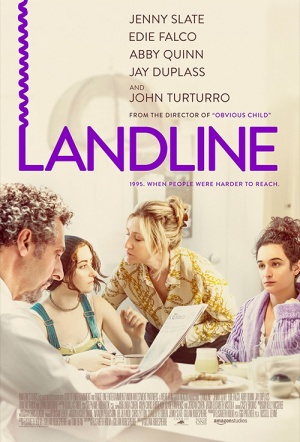 "The Manhattan of 1995: a land without cell phones, but abundant in CD listening stations, bar smoke, and family dysfunction. Enter the Jacobs. Eldest daughter Dana’s (Slate) looming marriage to straight-laced Ben (Jay Duplass) prompts a willful dive into her wild side, while her younger sister, Ali, (Quinn) is still in high school but leads a covert life of sex, drugs, and clubbing. After discovering love letters penned by their father, the sisters try to expose his apparent affair while keeping it from their all-too-composed mother." (Sundance Film Festival)

Robespierre still needs to fine-tune her skills as a storyteller, but scene for scene she has the right audacity - the honest kind - to explore that kind of experience.

[Slate's] smart, goofy persona veers from incredible confidence to total basket case in record speed, and this presents itself in brash, unique ways. Unfortunately, the movie itself is a retread of indie story beats we’ve all seen time and again.

Great movie bickering becomes a kind of music, but well before the end of "Landline," I just wanted the characters to cease their ranting and storming, or at least lower the volume.

Somehow manages to fall disappointingly flat all too often.

It's honest and sweet, but one can't help but think that focusing the narrative a tad would have resulted in a more satisfying watch.