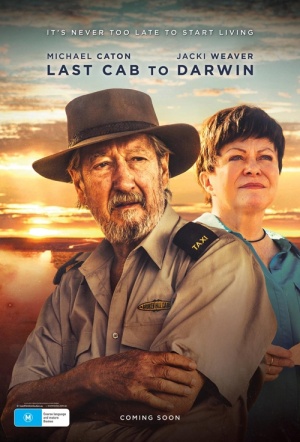 When lonely taxi driver Rex (Michael Caton, The Castle) is informed he doesn’t have long to live, he embarks on a colossal drive through the outback, from Broken Hill to Darwin in this Australian true-story drama. Rex's trip to Northern Territory is to take advantage of that state's short-lived euthanasia laws in 1996. Co-stars Academy Award-nominee Jacki Weaver (Animal Kingdom). Last Cab began life as a stageplay by Reg Cribb.

Cancer, euthanasia and a cab driver. It sounds like the unholy trinity of filmmaking. A veritable recipe for disaster with the dreaded terms "Australian film" and "indigenous issues" added for good measure.

It's not so much the destination but the physical and emotional journey embarked on in this thoughtful, culturally authentic road trip.

Well meaning and there is no shortage of heart, yet Jeremy Sims' film never quite delivers the warm package it intends.

The film shows little trace of its theatrical origins, not least because it consists of one ravishing shot of the blood-orange outback after another, and Sims wrings gentle pleasures from this most unlikely of subjects.

The film has good elements and decent performances, but just as the characters seem to mull over missed opportunities, we are left to feel the same way about the film.

A crowd-pleasing road movie that’s pleasant on the eye.