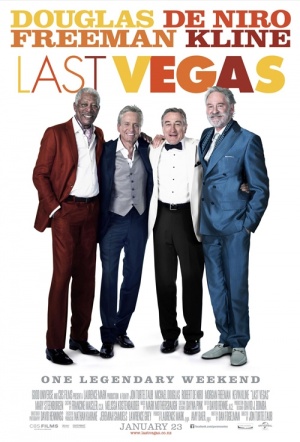 Oscar-owning veterans Michael Douglas, Robert De Niro, Morgan Freeman and Kevin Kline are ready to party like it’s 1959 in this elderly bachelor party comedy. From the director of Cool Runnings.

Billy (Douglas), Paddy (De Niro), Archie (Freeman) and Sam (Kline) have been best friends since childhood. When Billy, the group’s sworn bachelor, finally proposes to his 30-something girlfriend, the four head to Las Vegas with a plan to stop acting their age and relive their glory days. Upon arriving, the four quickly realise that the decades have transformed Sin City and tested their friendship in ways they never imagined.

A smattering of funny gags and the nostalgia value of the cast — none of whom, curiously, have ever shared the screen before — keeps the whole thing more watchable than it has any right to be.

Rote ageist jokes abound (“Do you guys have drugs?” asks a bachelorette; “Does Lipitor count?” responds Kline), but they come with an inclusive, self-deprecating spirit that grows more endearing over the duration.

Last Vegas is a good-natured bimbo of a movie, it'll do just about anything to please you, though luckily that includes delivering the 20 big laughs you feel you're owed (unlike The Hangovers), and gently jerking a tear or two. You enjoy it in spite of yourself.

It’s the geriatric equivalent of a ramshackle teen sex comedy, only intermittently elevated by the caliber of the talent involved.

Although formulaic in design and programmed to meet its quota of laughs, the film makes a point of going beyond basic expectations into some legitimate aspects of mature friendships without getting soggy about it.

While it’s as tacky and obvious as Sin City itself, this comedy is watchable thanks to a lively pace and spirited turns from Kline and Steenburgen. An unabashed old-timers’ fantasy.